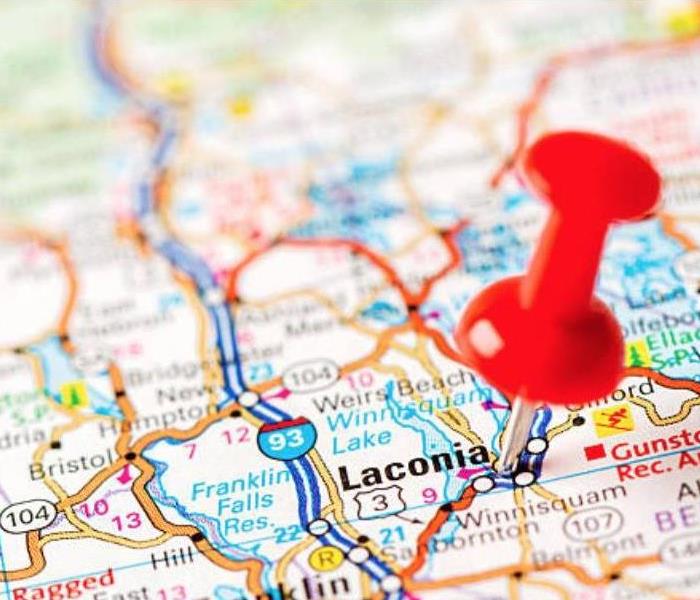 Give us a call today, we are prepared and ready to assist your Laconia water damage.

The city of Laconia got its start with the Abenaki Indians. The area that is now The Weirs was once an Abenaki settlement known as Acquadocton Village. The colonists discovered several fishing weirs at the Winnipesaukee River outlet. One of the goals of early explorers was to trace the Piscataqua River up to Lake Champlain. Indian folklore mentioned the great rivers and lakes of Canada, and they hoped this path would lead to that discovery.

Endicott Rock is a local landmark that marks the event of the Endicott survey team surveying the location around 1652. In 1746, a fort was built in Laconia. The settlement of the fort did not take place until 1746 due to the hostilities between the French, English, and Native American allies. The town was known as Meredith Bridge at this time.

Industry Develops, and A Town Grows

Mill Street and Parade Street are two streets that were first to see business growth. Mill Street saw the development of grist and lumber mills in 1765. Taverns followed on Parade Street. The courthouse was built in 1822 and would later become the county seat. The Belknap Mill began in 1823 to manufacture textiles and is a museum today. When it comes to brick textile mills in the US, it is the oldest, unaltered facility. Locals

While all that was welcomed into the city as it brought business and people, the biggest employer would be the Laconia Car Company. It started in 1848 and manufactured subway cars, rail cars, and trolley cars through the 1930s. In 1849 the railroad came to town and brought with it, not only freight but summer vacationers. Weirs Beach was a popular summer tourist spot.

When the town was incorporated in 1855, it was given the name Laconia. The city's name is thought to come from the old Laconia Company. This company was put together by John Mason. The Mason Proprietors' job during the colonial period was to sell land parcels. In 1893 Laconia went from being a town to officially incorporating as a city.

Two weekly Laconia newspapers would report one of the most devastating events in New Hampshire in 1860. On November 21, a fire struck in the early morning. The area impacted stretched from Water Street and Mill Street, the main business region, to the Winnipesaukee River. The only businesses to survive the fire was the Belknap Mill and the Ranlet Car Shops. The newspapers, Winnipesaukee Gazette and New Hampshire Gazette were burnt out too but were able to print with other papers' help.

According to The Democrat, “It is a calamity whose full effects are not yet realized ... It will probably be a long time since buildings of the style and magnitude of those constructed will be erected, if indeed, they ever are.”

Rising winds spread the flames and fueled the fire. Cerro Gordo House caught fire, and the inmates barely escaped. The pail factory, sash and blind factory, and the box factory were engulfed. Five more buildings would catch fire from a gale that arose and swept the flames in their directions. Eventually, firefighting efforts were given up as the street itself was too hot. Three-fourths of the village businesses were destroyed in under three hours despite the effort of the townsfolk, firefighters, and neighboring towns. Sadly, the buildings that burned were destroyed in 1846 in another fire. The city learned to avoid building a large number of wooden buildings in one area. Brick buildings were critical.

The Great Fire of 1860 was the incentive for establishing better fire protection and private fire brigades. Companies set them up, but they were made available to the public as well. By the 1870s, these private companies were all set with uniformed firefighters, firehouses, and modern equipment. The fire brigade was photographed in 1875 in Laconia. Their pride was a steam-powered water pump called an Amoskeag Steamer.  The fire company had grown by 1888 and had a hook and ladder and two horse-pulled wagons. The Weirs firehouse was built in 1894. Two more major disasters would take place:

A City That Overcomes Adversity

Today there are over 15,000 people in Laconia. Over the years, they have faced tragedy with perseverance and faith that they can make it through. And they proved they can. They rebuilt, more than once, and came back stronger than before. Now visitors come each year to enjoy the many events Laconia has to offer. Laconia Motorcycle Week, or Bike Week, is one of the largest in the country. Competition heats up in the winter during the Laconia World Championship Sled Dog Derby.

When fires hit a home and firefighters are needed, water and chemical removal are needed. People often do not think of water mitigation during a fire, but it needs to be addressed immediately. If let set, the water and chemicals from fire hoses can cause extensive damage. They are both caustic to surfaces they come in contact with and can cause secondary damage, such as mold. SERVPRO can extract excess water, clean up the chemical residue, and mitigate the fire damage. Fire and water restoration includes:

Our goal is always to leave your home, “Like it never even happened.” We are proud of our city and how the neighbors handle problems when they occur. We are also proud to do our part in mitigating many of those disasters. Contact SERVPRO of the Lakes Regions at (603) 527-2518 for water mitigation in Laconia.